Sometimes the hardest part of making it to the next level is dealing with all the expectations that come with it. As athletes get better in their respective sports, there is a tendency to attach a certain level of performance to the name. And that by itself has its own pressures. But it is a part of the process, and something that all top athletes have to overcome if they want to reach the very top of their sport. For Tommy Stevens of Life University, that narrative has never been truer, and his story is filled with the power of what happens you go far at a very early age. 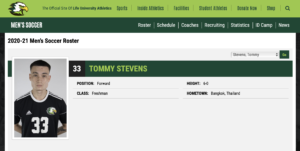 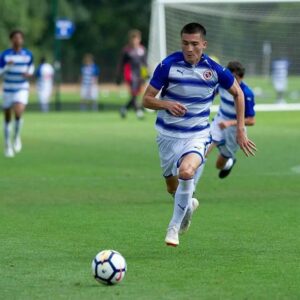 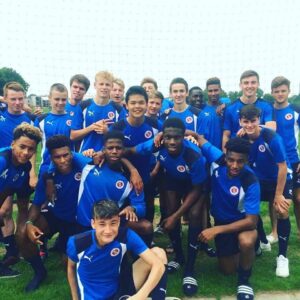 Tommy Stevens is a name that most soccer people in Chiang Mai will recognize instantly, for a number of reasons. From a very young age, his talent was very apparent, and his family was always very supportive of his soccer career. To continue to develop and be challenged, Tommy was invited to play with many teams, and so many players in Chiang Mai who played at a high level during his time there will have either played with or against Tommy. And he is well-known because he was able to grab his opportunity to join the Thai National team at age 12, and be a standout on that stage as well. 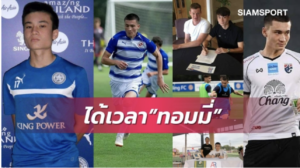 From a young age, Tommy was involved in a variety of sports. Tommy’s father was the Athletic Director at an international school in Chiang Mai, and he was encouraged to join almost every sport – badminton, swimming, soccer, basketball, volleyball and track. And he excelled at all of them. But the sport that Tommy loved was soccer, and after making the Thai National Team he set his eyes on creating a professional career in the UK.

“After being selected to join the national team, I was selected as the best player when I was 11 years old.  After that I went to South Korea to represent Thailand, and got the MVP award. At this point we looked at opportunities to join an academy in UK, and I trialed at Everton FC for 2 weeks, before agreeing to join the academy at Reading FC. I completed my IGCSE first, and then had a contract with Reading FC from 2017 to 2019, as well as playing as a member of the Thai U19 National Team.” Tommy was never content to be competitive in just Asia, as he pushed himself to become a player on both the national and international stage that would do his country proud. As his soccer CV and his playing history shows, he has both the talent and drive to succeed at the highest level, and we at The Agency look with excitement at the possibilities that the future holds for Tommy. 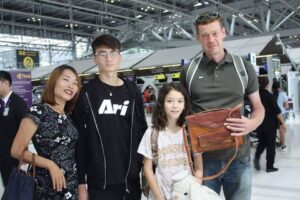 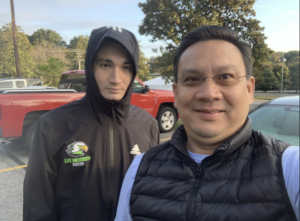 As Tommy’s journey continues to unfold, he can look back with pride on getting his first youth level international cap with Thailand, as well as tallying his first English Youth League goal. And with this amount of high level international and club level experience behind him, Tommy’s path through college is a bit different than others, who have not had these quality experiences. “For many of my teammates, this is their final objective. University soccer is a big step up in the quality of their athletics, and their aspirations are different. For me I have to stay committed to the final goal, and remember that college sport is a step to creating a new career path as well as receiving a diploma in the process.”

For the next few years, Life University will be the focus for Tommy, where he can concentrate on further developing his game and moving to the professional level, as well as getting his degree. Tommy is grateful to the Agency College Recruit, for working with him through his unique background and situation and finding him a number of opportunities. “Khun George and his team were excellent and supportive in everything, helping me get my scholarship and entrance into college within very little time. They have been supportive in keeping me positive, and making sure the coaches at Life would fully accept me. I can’t wait to see what the future holds, and I will do my best to reward all of those people who had so much belief in me.”